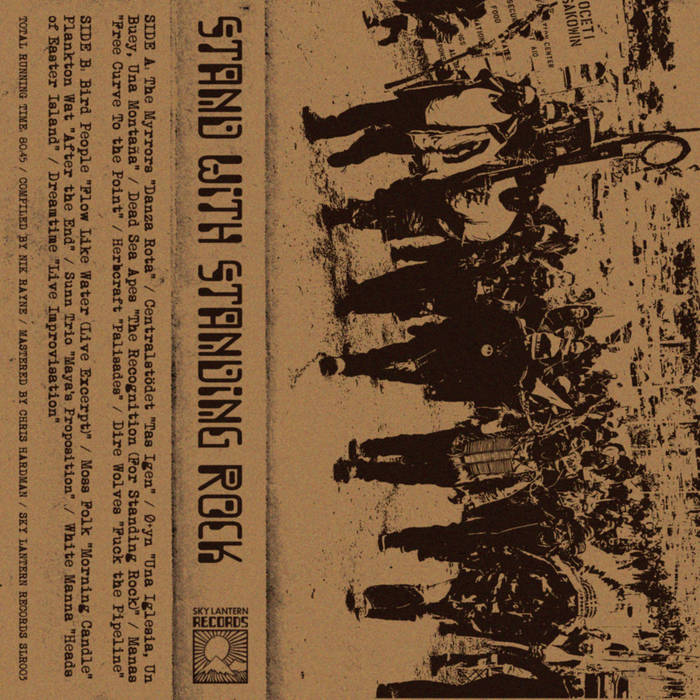 Karl Fuck the pipeline...unfortunately this problem has gained even more explosive nature thanks to a man building pipelines and walls rather than bridges...

Novasquad23 I don't know any of the musicians on this lp/cd but have heard of the struggle against the pipeline in Dakota, so I bought it for that alone. The music is actually quite good. Surprise yourself and take a punt.

Burnt Paw A.M.A.Z.I.N.G! Thanks to skylantern for putting this out. Burnt Paw x. Favorite track: The Recognition (For Standing Rock).
more...

Though the federal government may have recently promised to sit down and talk with protesters and requested a "temporary halt" in the construction of the Dakota Access Pipeline, the fight is far from over. More than twenty-five people have been arrested, the national guard waits with one finger on the trigger, and the movement defending the land around Lake Oahe continues to stand in what has become a historic display of cross-tribal (and cross-cultural) unity against the endless exploitation of indigenous peoples by the United States government and the continued desecration of natural habitats and resources by corporate interests. What was once a simple protest has become a movement, one that will likely continue to have an impact on national and inter-tribal politics well beyond the DAPL issue.

In support of this important ongoing struggle, a coalition of musicians from the psychedelic rock and experimental music underground have banded together and donated tracks to raise funds to help support the movement. This is an international display of solidarity which includes several names familiar to the Sky Lantern Records roster (dig new studio cuts from Centralstödet and Dead Sea Apes, as well as the latest avant-cult transmission from Argentina's Ø+yn) as well as many new friends from across the artistic and cultural spectrum, several of which (including radical desert free-jazz ensemble Sunn Trio) will be releasing new music on SLR in the near future. There is almost an hour and a half of almost entirely previously unreleased recordings here, and while the artists represented may be diverse, there are threads tying all of the sounds here together beneath a banner which cries out: stand with Standing Rock!

Proceeds from cassette and digital purchases will go to help support the protesters, especially in regards to legal defense funds for those arrested for their acts of resistance. Please consider donating a little extra when downloading or order the tape, every little bit counts!

NOTE: a thousand thanks to all of the folks who were so incredibly quick to answer our call and donate these recordings, as well as to the inimitable Chris Hardman who graciously offered to master the album!

Bandcamp Daily  your guide to the world of Bandcamp